A review of the application of Multi-Objective Evolutionary Fuzzy Systems: Current status and further directions

This section introduces some basic concepts related to MOEFSs. Firstly, FRBSs are introduced. Secondly, some important concepts regarding evolutionary optimization techniques and particularly Evolutionary Multi-Objective Optimization (EMOO) techniques are presented. Finally MOEFSs are defined as the hybridization of the two approaches.

The main feature of this approach is that it provides an approximate but effective means of describing the behavior of complex systems, thus avoiding the need for a precise mathematical model of the system to be controlled. Fuzzy systems have been extensively and successfully applied to several fields, such as economics, engineering, science, psychology, medicine etc.

The most common fuzzy system model consists of a collection of logical IF-THEN rules, whose antecedents and consequents are composed of fuzzy logic statements, related by the dual concepts of fuzzy implication and the compositional rule of inference. These kinds of systems are called FRBSs and are composed of a Knowledge Base (KB), which includes the information in the form of IF-THEN fuzzy rules, and an inference engine module.

Depending on the format of the rules, FRBSs can be roughly divided in several families, which differ in their ability to represent different types of information.

).
In linguistic fuzzy models, the fuzzy quantities are associated with linguistic labels and the model is a qualitative expression of the system. This type of model describes the system behavior using a natural language. The consequent of the rule can be an output action or a class to be applied:

with i=1 to M, $X_1$ to $X_n$ and Y being the input and output variables for regression respectively, $A_{i1} $to $A_{in}$ and $B_i$ being the involved antecedent and consequent labels respectively, $C_i$ being the output class associated to the rule for classification and $w_i$ being the certain factor associated to the class. These systems are usually called linguistic or Mamdani FRBSs.
TSK fuzzy models are composed of logical rules that have a fuzzy antecedent and functional consequent parts. They can be represented as:

with p(·) being a polynomial function, usually a linear expression:

), which differ from linguistic FRBSs because of their semantic-free rules. Each fuzzy rule presents its own semantic, i.e., the variables take different fuzzy sets as values (and not linguistic terms from a global term set). Therefore, the fuzzy rule structure is as follow:

In the case of linguistic variables, the KB includes two components, a Rule Base (RB) and a Data Base (DB):

The inference engine module of FRBSs is defined in different ways, depending on the kind of problem (classification or regression) and the kind of fuzzy rules. It is always constituted by three elements:

Figure 1: Structure of an FRBS.

The origin of evolutionary algorithms can be traced back to the 1950's. Genetic algorithms, evolution strategies and evolutionary programming are three main approaches to evolutionary computation. Genetic algorithms (Goldberg DE (1989) Genetic Algorithms in Search, Optimization, and Machine Learning. Addison-Wesley, Boston, Massachussets, USA, Holland JH (1992) Adaptation in Natural and Artificial Systems: An Introductory Analysis with Applications to Biology, Control, and Artificial Intelligence. The MIT Press) are general purpose search algorithms that use principles inspired by natural genetic populations to evolve solutions to problems. The basic idea is to maintain a population of individuals that evolves over time through a process of competition and cooperation. Each individual constitutes a candidate solution to a problem and has an associated fitness, which represents the quality of the solution. New solutions are created by means of genetic operators such as crossover and mutation. Genetic algorithms have been successfully used in various applications of search and optimization problems.

Multi-objective problem
Even though some real problems can be described by means of a single objective, there are cases in which it is difficult to define all the aspects in terms of a single objective. For this reason multi-objective optimization has become very popular in the last few years and its application is continuously increasing (Deb K, (2001) Multi-Objective Optimization Using Evolutionary Algorithms. John Wiley & Sons, Inc., New York, USA , Coello CAC, Lamont GB, Veldhuizen DAV (2006) Evolutionary Algorithms for Solving Multi-Objective Problems (Genetic and Evolutionary Computation). Springer-Verlag, Secaucus, NJ, USA). A considerable amount of papers and books has been published in this research area, now named EMOO. In the following subsections, some well-known concepts regarding EMOO will be briefly introduced. First, a multi-objective problem is described by means of mathematical equations, then the definitions of Pareto optimal and Pareto front are explained. Finally, a quick overview of the most important MOEAs is provided.

Multi-objective optimization usually involves multiple contradictory objectives to be optimized simultaneously, thus there is no longer a single optimal solution but rather a set of feasible solutions of equivalent quality and each solution represents a trade-off between the conflicting objectives.

The problem can be formally formulated as follows: find the vector

which will satisfy the m inequality constraints:

and minimizes the vector function

The concept of Pareto optimal was stated in the 19th century by Pareto (Pareto V (1896) Cours d'economie politique. F. Rouge, Lausanne) and constitutes the origin of research in multi-objective optimization. A solution $\bar{x}^*$ is Pareto optimal if it is not dominated within the entire search space, that is, if for every $$\bar{x} either

where I is the number of objectives, or there is at least one i \in I so that

Evolutionary algorithms simultaneously deal with a set of possible solutions (the so-called population) and are able to find several members of the Pareto optimal set in a single run of the algorithm. Additionally, they are not too susceptible to the shape or continuity of the Pareto front, e.g. they can easily deal with discontinuous and concave Pareto fronts. The possibility of using evolutionary-based searches to deal with multiple objectives was suggested for the first time by Rosenberg (Rosenberg R (1967) Simulation of genetic populations with biochemical properties. PhD thesis, Univ. Michigan) in his Ph.D. thesis, although no MOEA was developed in it: the multi-objective problem was restated as a single-objective problem and solved with a genetic algorithm.

The first implementation of an MOEA was the Vector Evaluation Genetic Algorithm (VEGA) (Schaffer JD (1985) Multiple objective optimization with vector evaluated genetic algorithms. In Proceedings of the 1st International Conference on Genetic Algorithms, 93-100) proposed by Schaffer. Despite its simplicity, the algorithm suffers from some drawbacks. After VEGA, several algorithms were designed, mainly characterized by their simplicity. In 1989 Goldberg (Goldberg DE (1989) Genetic Algorithms in Search, Optimization, and Machine Learning. Addison-Wesley, Boston, Massachussets, USA) suggested combining a good mechanism to select non-dominated individuals (perhaps, but not necessarily, based on the concept of Pareto optimality) with some mechanism to maintain diversity (fitness sharing was a choice, but not the only one), in order to achieve a selective pressure toward the non-dominated front while maintaining at the same time diversity along the front. These two concepts were widely exploited in the first generation of MOEAs. The most representative MOEAs of this generation are the following: Non-dominated Sorting Genetic Algorithm (NSGA), Niched-Pareto Genetic Algorithm (NPGA), Multi-Objective Genetic Algorithm (MOGA) and Multi-Objective Genetic Local Search (MOGLS).

In the second generation of MOEAs, the concept of elitism was introduced, since it is a theoretical requirement in order to guarantee the convergence of an MOEA (Rudolph G, Agapie A (2000) Convergence properties of some multi-objective evolutionary algorithms. In Proceedings of the 2000 Congress on Evolutionary Computation, vol. 2, 1010-1016). Elitism refers to the use of an external population to store the non-dominated individuals found so far in the optimization process. Elitism can also be introduced by using a different selection process, in which parents compete with their children for the selection of the non-dominated solutions that will be included the following generation. Many MOEAs have been proposed during the second generation, but only a few algorithms are considered to be paradigms by researchers. The most representative MOEAs of the second generation are the Strength Pareto Evolutionary Algorithm (SPEA) and its evolution SPEA2, the Pareto Archived Evolution Strategy (PAES), the Pareto Envelope-based Selection Algorithm (PESA) and PESA2, the micro-GA and its improvement, NPGA2 and finally NSGA-II.

NSGA-II is the current paradigm in the MOEA research community, because it can usually obtain the widest Pareto sets in many problems, although recently researchers have been looking for new algorithms that could manage many objectives or very complex Pareto fronts, by controlling population density in a more effective way. Among them, the most famous one is the Multi-Objective Evolutionary Algorithm based on Decomposition (MOEA/D). Table 1 shows a summary of the most representative MOEAs of both generations.

Researchers are still looking for new characteristics that will give rise to the third generation. They seem to be oriented towards many-objective optimization, since it is known that more than three objectives are difficult to handle (Ishibuchi H, Tsukamoto N, Nojima Y (2008) Evolutionary many-objective optimization. In 3rd International Workshop on Genetic and Evolving Fuzzy Systems, 47-52, doi: 10.1109/GEFS.2008.4484566). Other research fields are algorithm efficiency and spatial data structures that improve the efficiency of storage in the external population.

A GFS is a fuzzy system in which system parameters or structures are evolved by means of a genetic algorithm. A genetic learning process covers different levels of complexity, i.e., it can be used for parameter optimization, to improve the performance of an existing fuzzy system, or for structural tasks, such as learning the whole rule set of a FRBS (Figure 2).

Initially, GFSs were mainly used to design FRBSs with high accuracy in problems such as classification and control, but later on the need to include multiple objectives arose (Ishibuchi H, Murata T, Turksen IB (1997) Single-objective and two-objective genetic algorithms for selecting linguistic rules for pattern classification problems. Fuzzy Sets Syst 89(2):135-150, doi: 10.1016/S0165-0114(96)00098-X). As stated above, in a multi-objective problem objectives are often conflicting, thus a multi-objective evolutionary algorithm generates a set of fuzzy systems and each of them has a different trade-off between objectives. The chosen objectives depend on the aim of the designed fuzzy system. The primary one is the accuracy of the system with respect to a performance metric. Other objectives can be the complexity of the system, the cost, the computational time, additional performance metrics, etc. The application of MOEAs to learn or tune fuzzy systems brings about the MOEFSs.

Complementary Material 2: A taxonomy of contributions dealing with MOEFSs

Our proposal analyzes a collection of papers in which MOEFSs are applied to different problems. In this section a brief overview of the considered categories is given and then three summarizing tables are presented.

We propose a two-level taxonomy, as showed in figure 3, in order to jointly analyze the different types of MOEFSs. The first level gathers contributions depending on the multi-objective nature of the handled problem, i.e. the type of the objectives optimized. The second one groups papers depending on the type of FRBS components that are managed by the optimization process. In fact, both of them affect the type and the complexity of the search space, and therefore the way to apply MOEFSs: 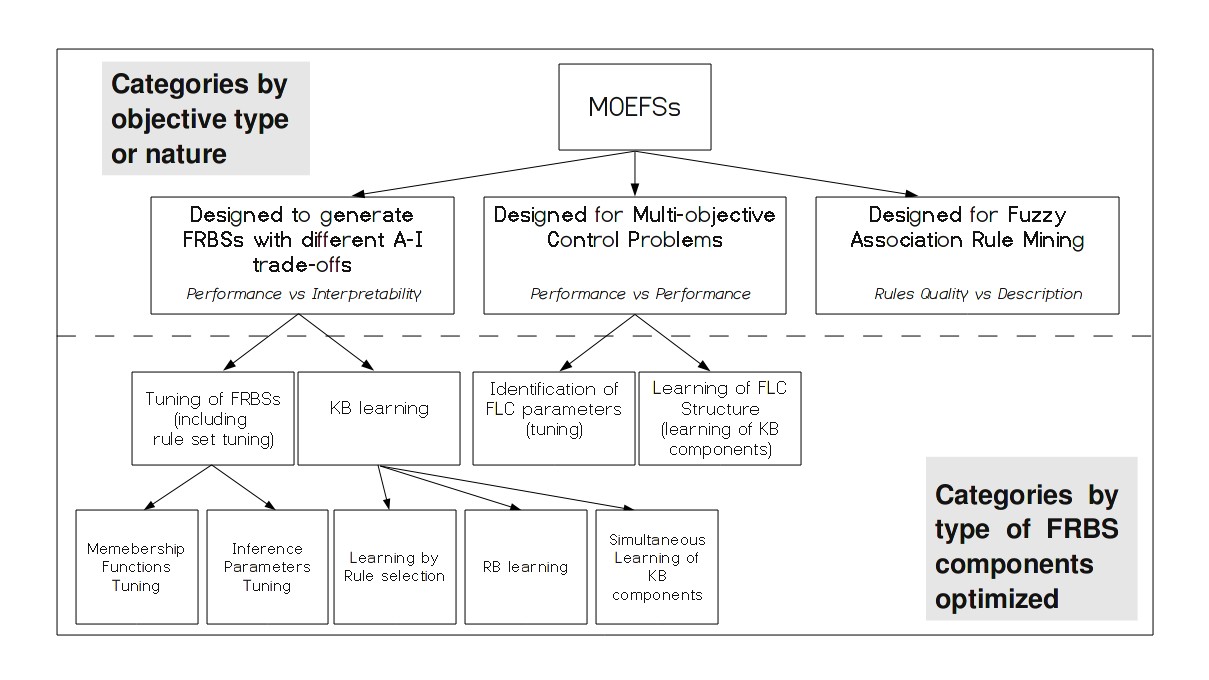 A summary of the contributions dealing with MOEFSs, with respect to each main category: Contributions in the paper (including DOI)

This section contains a visual summary of the proposed taxonomy. Contributions are presented in the form of tables so that all those related to a particular branch can be easily found.

The following table presents a summary of the works on the use of MOEFSs to generate FRBSs with good Accuracy-Interpretability trade-offs. Papers are grouped considering the components of FRBS that are managed by the optimization process.

The following table presents a summary of MOEFSs for multi-objective control problems.

Table 3. Summary of the proposals on MOEFSs for multi-objective fuzzy control problems.

Table 4. Summary of the proposals on MOEFSs for mining fuzzy association rules